tavi (stylist of the week. sort of.) 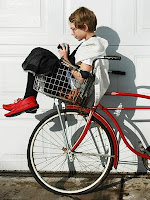 only a few weeks into this 'weekly posting feature' and i'm already behind, and straying from the initial idea. i'll try to be back on track next wednesday - which is only a few days away already. sighing and sighing.

tavi. tavi is this hilarious and adorable 14 year old style-blogger. she's getting to be quite well known. because she's hilarious, and adorable, and 14. or so. maybe she's not even 14 yet. she might still be 13.. onwards. at first i was all 'isn't that just cute! her style's pretty rad, too.' and now i think she's my favourite blogger of them all. see, she has really good things to say, and she's smart and witty, but not pretentious in the way she says them. (although she does like to point out moments of 'teen pretention', which is rather funny.) a remarkable young girl, all in all.

so she isn't a stylist, in the strictest sense. but she is in the business of style. and i like her.

check out her entry on the Prada f/w 2010 show. (note that she includes musical theatre in her review. awesomepants.)

p.s. my birthday is coming up and i want one of her t-shirts. just sayin...

a little late, sure. but i was working! fashionworking!

this week's stylist is, of course, sarah jay.

my new stylist friend, who invited me to new york, and was awesome and helpful and wonderful. so much! so much learning! and thai food and candy...

anyways. i don't have any images of sarah's styling work, but i did get to see her portfolio. and it's superb. she's done a lot of tv work - canada's next top model, project runway canada, cosmo tv and so o n and so on. super cool. she didn't go to school to be a stylist. and she's been super successful. which all makes me very glad and inspired.

here she is overseeing a run-through for deux fm, a canadian designer who showed at the green shows on wednesday, feb 17th. (there were some dresses i REALLY wanted in that show.) 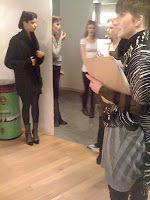 and, quickly, here are a few of the highlights/favourites from new york. (holy cow!)

favourite model:
-kelly. she was super-great. she filled in in lots of shows she hadn't originally been cast in. worked hard. had awesome red hair. was really nice. here she is backstage wearing something from the Ekovarhuset (house of organic) collection. 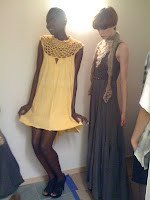 act cool moment:
-i pretended my brain wasn't exploding when i recognized laura from the last cycle of america's next top model. (she came in 2nd.) she walked for deux fm. also notable was 'lazy-eye', also from antm, whose name i can't seem to remember for the life of me. 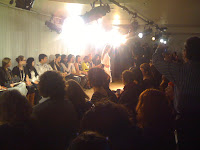 nerdy celebrity sighting highlight:
-karlie kolss! it's freaking karlie kloss! she is THE model. now. everywhere. every second page of vogue. i saw her exiting the isaac mizrahi show at bryan park. (no, i wasn't in the show. of course not. i was stalking the bryant park tents waiting to see someone awesome. success!!!) she is really tall. whoa. i've seen edmonton models. tall thin. then i saw the green show models. taller some thinner. then i saw the BIG NAME models. giants. giraffes. soooooo tall sooooo thin. wow. whoa. (note. i was worried that i would feel less than thin around these model-types. but instead i just felt nice and normal. they're like creatures from another world. amazing and beautiful, but... well... specialweird.) 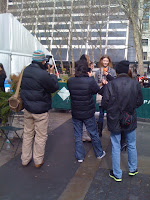 i also saw jason schwartzman at liquiteria - a little juice bar type place very near our venue. we went there a lot for hot ginger water to ward off our coughs.

awesome things:
-i picked up a copy of WWD (women's wear daily) each day of my trip. it made me feel pretty cool.
-i felt surprisingly safe and comfortable in new york. it was really homey, and i think that most of the time i didn't look too much like a tourist. before this trip i said i didn't think i could hack living and trying to fashionwork in new york. now i say i could. and i think i'd do good, too.
-i called a show! crazy. for willian. it was her (kia's) first fashion show. and mine too. awwww. i did make a fairly significant mistake and que lights and music to start before sarah was ready in the back... ahem... but they covered well and overcame my blunder. and now that's a mistake i'll never ever make again! phew!
-i had breakfast with our old friend clugger the scotsman. so nice to see him and catch up. and a really great breakfast, too.


lowlight:
in bryant park i saw a puff of frizzy red hair and thought 'AHHHHHHHHHH! GRACE CODDINGTON!!!!', but it wasn't. sad.

one of the very first designers who made me want to be in the fashion world was alexander mcqueen. it was a goal of mine to one day attend one of his runway shows. sadly, that is no longer a possible goal - at least not to attend a show with the founder at the helm. lee alexander, you will we well missed.

member how i said, in my last post, that my bosses at murrieta's are mad cool? well. they've done it again!

the other day i was told that i was chosen to go spend $150. on olympics clothes/gear. for myself. just cause they think i'm super. (one of our wine reps works for the olympic wine guys (iniskillin, n'kmeep, etc.)) and so... free stuff for erin! okay! coooool!

check out what i got today! 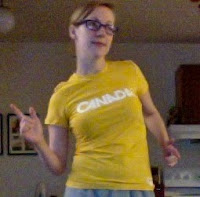 p.s. i know, i know. there's no stylist of the week. you're all upset and whatnot. it's been a busy week, what with new york prep. so i haven't had time to look around for one. but... i did go on a 'styling job' today (helping my friend jess buy clothes. and she works in TV!), so i guess i could be the stylist of the week? those are some stylish photos up above. 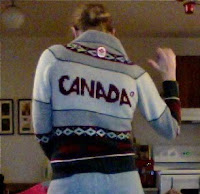 i got invited to assist the associate producer (sarah jay the stylist, of toronto fame) for the green shows eco fashion week.

so. i'm going. and because my murrieta's bosses are rad to the max, it looks like they're willing to let me off my sunday night (valentines...) shift, even though there's no one to cover it. they're all 'we'll make it work...' and i don't think they even know they're paraphrasing mr. tim gunn. so. flying out next saturday!!!

anyways. i don't know much about the events yet, since i just heard about them this morning, but here's the website:

i'm gonna do some reading from there soooon, and then i'm gonna run in circles screaming and punching the air.
oh, and then i'll probably book some flights, and a place to stay, and all that jazz.

and then i'll decide what to pack!

would you look at that. it's barely after noon! okay. a few hours... still. good work, me!

here's our girl for this week.

(i'm beginning to worry about the complex nature of the stylist's names. 'erin k hooper' may be a bit simple for the industry... maybe that'll make me extra special?)

tammy lives in new york, but she studied and worked in canada. i think that she is 'from here'. and she styles, still, for Fashion magazine. which is canadian. but you all know that already. right?

here are some pictures of model-girls hangin out in groups: 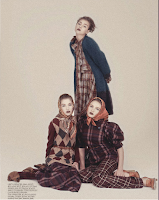 i don't know who the photographer is for this one - i will admit it annoys me when the stylist's websites don't have that kind of information up. or maybe it's just secretly hidden somewhere and i missed it...
posted by erin k h at 3:54:00 PM No comments: