I love Christmas. And I love snow. And I love Saskatchewan. And I love being home and with my peeps. I love when the sighs are all heavy with happy and good food and wine and company.
posted by erin k h at 12:06:00 AM 1 comment:

in answer to your catholic question 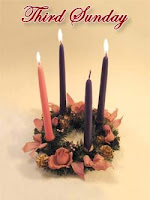 at brunch this morning Travis asked why the advent candle for week three is pink instead of purple like the other ones. shamefully, none of us knew. so... wiki!

"Gaudete Sunday from the Latin word "rejoice." Gaudete Sunday anticipates the joy of the Christmas celebration, so its color is a mixture of Advent purple and Christmas white. It may also symbolize the color of early dawn."

now we know! although i have to say their colour theory is a bit weak. what happens when you add white to purple? you get pastel purple. NOT pink. sigh. the western christian church needs to go back to art school.

oh. and apparently the others are purple because purple represents royalty, and ol' j.c. is the prince o' peace. knowledge!
posted by erin k h at 9:16:00 PM 2 comments:

there are girls everywhere these days with their hats and toques balanced Just So. their fringe just peaks out stylishly. and it looks so casual. so easy. but whenever I try to wear hats in such a manner, one of two things tends to happen:

it slides over my eyebrows, getting hair in my eyes and leaving me looking decidedly tabogoney...
or
it slides right off the back of my head. staticky hair and a hat on the floor.

but. but... I have found a hat that if I try really hard, and hold rather still, stays where it should. yes. I'm thrilled. surely this is a sign that it is within my grasp to be so alloufly, fashionably hatted. with practice. 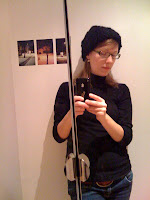 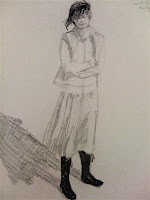 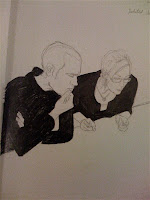 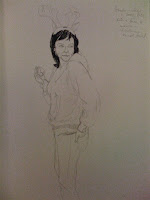 TADA! (there are more from today. but you'll have to just wait for those.) 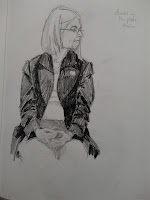 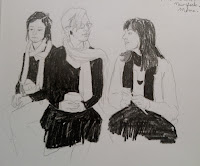 i was going to show you the little drawings i have done since i arrived at this INSANELY AWESOME artist's retreat.
but i can't seem to get the pictures onto this computer... so. later for that.

meanwhile.
look up cove park on the internet machine.

it is kinda like the banff school meets candle lake by yourself in the winter, but all wrapped up in scottish. it is beautiful, and peaceful, and snowy, melty, icy, slushy, great. we're somewhere on the west coast of scotland, about an hour or so north of glasgow. every year the mfa drawing and painting program is generous enough to book this place for us for one week. as a sort of wind-down before christmas, good job getting your paper done (those of us who did...), think about this term, and smile lots.

i arrived tuesday afternoon after an adventurous day of travel with kathryn - the only second year to get her 9000 word paper handed in early and make it out here... there were three peeps who had made it out monday. justin, grazyna, and daniela.

i'm living in one of the cubes. (there are cubes and pods, and i'll show you pictures later, and you'll smile and be happy.) the cubes are solo-accomodations, and the pods are shared. one of the pods (the 'girl's' pod) has become our sort of hangout-homebase. yesterday grazyna headed home to finish her paper, and the rest of us went for a stroll down, down, down the hill to the water. beautiful. awesome. grand.

then we went our separate ways for the afternoon. i spent a couple hours drawing the drawings i was GOING to show you. in my warm cozy cube. listening to music loudly and singing, and enjoying the view. then a group happy hour with the wine our program head, glen, sent along for us. (gerry, bettina, and thomas had arrived sometime in the afternoon. now. seven of us.)

i cooked us dinner (veg madras curry and rice) and justin invented a funny drawing game, kind of like the 'first line' novel game... kind of. basically we tried to draw the sumation of someone else in the program's artistic practice, and then we all guessed who it was... hilarious.

so much goodness. so little time. i'm off now to explore some more, and maybe spend some time with the piano in the hangout-pod.
posted by erin k h at 7:06:00 AM 3 comments: