oh man the cranky moody monday. let's just do away with mondays completely, yes? write off.

you know when you look at the way people talked about certain issues in the past and are all 'whoooa i can't believe people talked like that...' around issues of race and culture, maybe. homosexuality. tolerance isn't across the board these days, but it is way better than it was for so many. and we kind of almost laugh about how ignorant and idiotic the previous sentiments could be. you know? well i hope in the not so far future that is how we'll look back at today and the way that trans people are spoken to/about.

this past wednesday was international transgender day of remembrance.  tdor was created to give space to the memories of those who were killed by hateful, prejudiced, anti-trans violence. you can read all about it.

* INFO! INFO GRAPHICS!! we all love infographics. and learning.

and... i hope the following tumblr is just laughable and archaic. soon. very very soon. please.

"Have you been buying the wrong clothes again?"

we are making lists, these days. lists. reminders. things like:

dancing and live music. which luckily there is a lot of here in toronto. friday sarah jay and i attended the big sound motown show. this is my second time. harmony and brass and tamborines.

(and a classic. original.)

hey other person! you're doing feminism wrong! let me tell you how you're doing it wrong. you're the worst. feminism is one woman winning at being feminist best and all other women suuucking at it, the end!

or so go the arguments lately. who is winning feminism and who is the worstest. can we work on that? can we work on an inclusive feminism? please? okay cool. thanks. i like your ideas! maybe they are better than mine! maybe they're not better, just different. maybe i can learn from them. and vice versa. whaddaya say?! fun, right?! cool. cooooool.

there have been a few 'this person is a good feminist and you can tell cause all these other feminists are actually terrible' pieces around. and the one i'mma link to is actually pretty gentle, and probably even has an okayish point in there. but. well:

* miley cyrus is 'one of the biggest feminists in the world'

yeah, that's a little laughable maybe... maybe miley's grasp of the feminist movement isn't totally spot on perfect. reductive and dismissive, maybe. probably. she's young or whatever. privileged. but know what i didn't hear in her quotes that the article seems to be picking at? that miley cyrus thinks she is the QUEEN feminist. 'one of' she says. not 'THE biggest feminist'... see the difference there?

miley's quote doesn't point to malala yousafzai moving over. they can BOTH be feminists! what?! i know, right? nutso. and guess what: malala yousafzai ain't a perfect feminist either. cause there is no such thing! malala is awesome. super awesome. and young, too. so she'll probably make mistakes as she grows into an awesome feminist woman. and you could argue that malala is better for the world than miley, but that's kinda unfair and dismissive, too. because a pop star who openly and happily calls herself a feminist is a GOOD THING. even if she doesn't always do it right. maybe pop-loving young ladies will hear that and wanna be a feminist too. maybe it will start them on a path to becoming awesome members of team feminism. that's not nothin'. (remember that time when a woman was given a big fancy high up position as ceo of yahoo and was all 'i'm not a feminist' cause feminism is a bad word, ewwww?) i fall victim to this me vs you mentality of feminism often, and i'm trying trying not to. i will be a better feminist for the trying, i hope, i think.

also. remember this? still love this:

and while we're talking pop music and ladies, here's a little something extra for you that was released today, merry feminist friday:

oh canada politics. you're really workin hard at being as dumb as our southern neighbours, aren't ya? 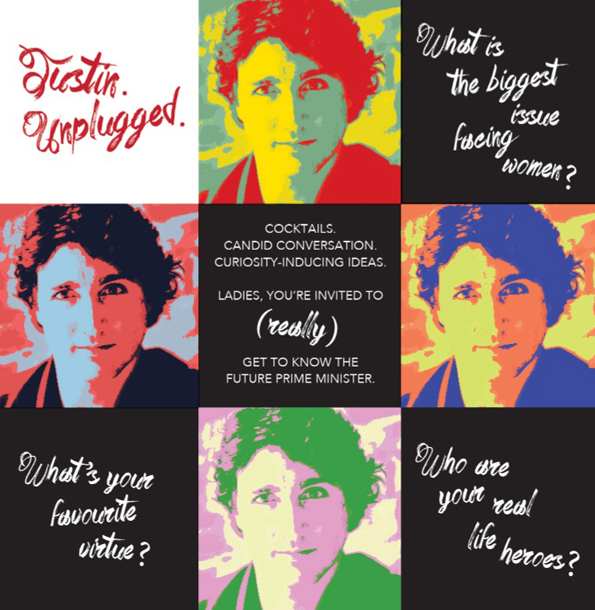 for fuck's sake liberals. know what ladies love?! cursive script! handsome men! chatting! photobooth selfies! it all sounds so intimate! maybe if we can cozy up to him real nice like we can get ourselves a DIAMOND?! oooooooooooo blush, shrug, giggle! here's my monies!! come the fuck on. way to completely alienate the 'fairer sex'. i cannot roll my eyes hard enough. you wanna know what the biggest issue facing women is? this patronizing, condescending bullshit that pats us on the head and bats its eyes at us while telling us that we're super important. thanks.
posted by erin k h at 9:19:00 AM No comments: